While shopping for baby diapers for Sue, who has run out of them on a baby-sitting job, Frankie is completely humiliated when a clerk assumes she’s shopping for adult diapers. Meanwhile, after getting on Mike’s case to get a physical exam because she thinks men tend to fall apart faster than women as they age, Frankie proceeds to throw out her back and hides it from Mike, who tells her he received a clean bill of health from the doctor; a clueless Sue falls for Axl’s friend, Sean, who barely notices her existence; and Brick begins to test all of the age-old urban legends parents tell their kids – such as not to swallow a watermelon seed for fear one will grow in their belly – after discovering Frankie has used these white lies on him in the past. 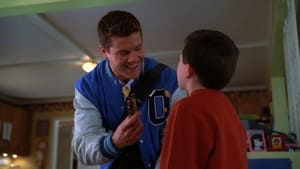