Mike begrudgingly invites his brother, Rusty, who is temporarily living in a tent, and his father, Big Mike, who has recently broken his hip, to join him for the annual Heck family Thanksgiving. But when Frankie observes the macho Heck men’s non-communicative nature, she encourages a not-so-receptive Mike to engage them in a real conversation and express their feelings. Meanwhile, Brick is ecstatic when he discovers that Bob is bringing his girlfriend, Linda – the local librarian who loves books as much as Brick does – to Thanksgiving; and Sue wants to start a mother-daughter tradition of baking a pie for the holiday, but ends up getting more sliced up than the crust. 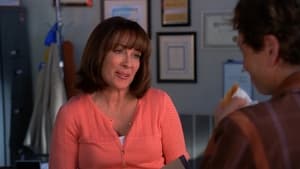